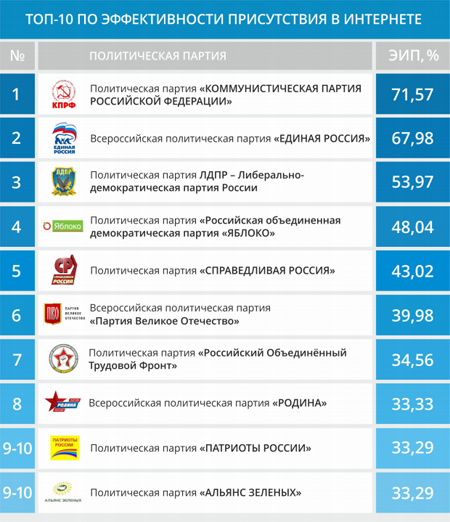 Gurov and Partners Communication Group released its third version of the rating to assess efficiency of Online Footprint of the Russian political parties. More than 40 parameters were used for the assessment. The parameters can be nominally consolidated  into three groups: information exposure, interactivity as well as social media presence and technology orientation.

Indexes of the first group (17 parameters) cover presence of the information useful for the websites visitors. Another 12 parameters assess user communication services and the party presence in the new media. And 12 more parameters cover the website operation and user experience.

Methodology of the ranking has been significantly revised In the new edition of the  whitepaper. The engagement rate and number of mentions in the social media were taken into consideration. The engagement rate index counts total number of comments, likes and Shares of all the party messages within 1 month. The second index registers total number of mentions of the party in all word forms and spelling variants.

A total number of 669 million Russian language messages published in all the popular social groups and blogs within a month was processed. Brand Analytics company engaged in monitoring and analysis of information in the new and online media worked on this part of the research.

“The revised methodology shows real presence of the parties in the network much better. As a result we have changes in the top three – KPRF shooted ahead (in the previous ranking it held the forth place), Edinaya Rossia came down to the second place. The break-off of the mentioned two parties is quite significant.   LDPR is still taking place two” – says Philip Gurov, general director of Gurov and Partners Communication Group.

According to the research efficiency of the Internet Footprint for the parties presented in the Internet equals to 20.59% in average. The index is much lower compared to the previous ranking. Many parties do not actively operate in the new media meanwhile 19 of them do not have their own website. Read a complete version of the rank here. 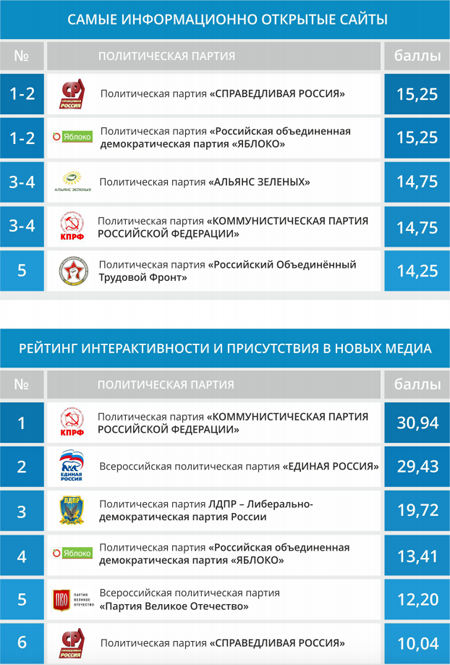 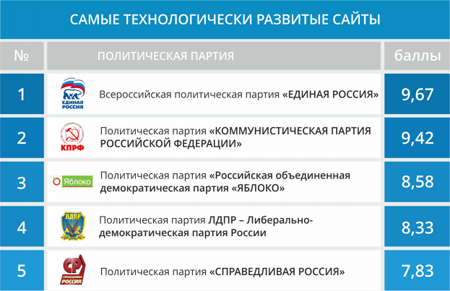